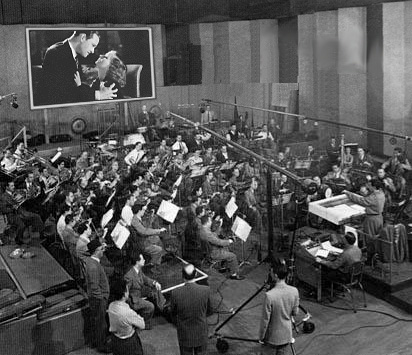 (above: Miklos Rozsa conducts a scoring session at Universal Studios Soundstage 10 in the 1940s)

researched and compiled by The Media Management Group

In the "Golden Age" of the Studio System, motion picture studios presented to the world a carefully crafted image. A familiar part of that image was their own self-important identifier (known as a "logo") at the beginning of every movie (and later at the end of every Television series.)

Short musical statements were created to accompany the visual "logo." These pieces were also known as the "trademark", "emblem", or "signature" (or in modern times, the "I D" or "logo.") [The British call such logos "idents".]

These proud short pieces heralded the glory of the U.S. studio or production company which made the picture you were about to enjoy. Indirectly these validated the institution of the studio, and were certainly ego strokes for the pioneer producers at the helm. Usually they were part of the assignment to score a particular motion picture. The recording was done at the same time as the rest of the film score. Copies were then spliced into the soundtracks of later films until it was time for a new arrangement or even a new logo.

Originally these short musical signatures were written on assignment by master film composers working under weekly contract for the studios. Later independent composers would be contracted to write logos for modern production companies and TV networks.

Origins of the "20th-Century Fox Fanfare"

Perhaps the most famous studio fanfare is the one associated with "20th Century-Fox" by the legendary Alfred Newman. Newman had started in Hollywood as an arranger for United Artists, but began his film composing career in 1931 with a Samuel Goldwyn picture called "Street Scene." The main theme of this film was used in several ways: as a motif for cues in other filmscores, in an concert overture which became famous on its own, as a popular trumpet instrumental called "Sentimental Rhapsody", then as a secondary THEME for the radio series "My Friend Irma" and later as an on-screen overture to the 1954 picture "How To Marry A Millionaire" where Newman is seen conducting the studio orchestra on camera before the picture begins. (But contrary to popular belief, the famous "Twentieth Century-Fox Fanfare" was not heard at the beginning of Newman's first picture, "Street Scene.")

Correspondence with Ed Nassour, VP of Post Production for 20th-Century Fox verified that the original "20th Century Trade Mark" fanfare was recorded on the United Artists Soundstage 7 on the Santa Monica Blvd. studio lot, during the early 1930s (when Darryl Zanuck's 20th Century Films were being distributed by United Artists, but before 20th Century Films merged with Fox Studios.) Nassour said, "It wasn't until the early fifties that Newman made a new recording at Fox. He recorded the original version and it was used in a few select films."

In 1953, when Cinemascope was introduced, the first picture to be filmed using this wide-screen technology was the Biblical drama "The Robe" which Newman also scored. But this religious epic used an appropriately solemn choral overture behind the opening visual trademark. No trademark fanfare appeared at all.

The second film released in Cinemascope was the 1954 frolic called "How To Marry a Millionaire." Although composer Newman is a very big part of the opening of this film, it is in the role of conductor of his studio orchestra in the performance of an orchestral version of "Street Scene" as a concert overture. To make the Cinemascope format seem even more like an "event" technology, Mr. Newman and the orchestra are seen on-screen performing this "overture" in wide-screen Cinemascope before the action of the film begins. But the trademark fanfare is heard at the beginning in its earlier shorter length -- not yet extended for promoting Cinemascope.

Ed Nassour speculated (and subsequent research has confirmed) that the "CinemaScope Extension" was first added to the "20th Century-Fox Fanfare" for the score of "River Of No Return" (a 1954 Robert Mitchum picture filmed in Technicolor in Canada to include the spectacular rugged scenery.) This picture was scored by Cyril Mockridge with songs by Lionel Newman (Alfred Newman's brother) who conducted the studio orchestra. That is the version that eventually was filed as an actual Trademark with the U.S. Patent & Trademark Office. (The most recent version of the fanfare is Trademark #74629287.)

Thereafter Alfred Newman's musical TradeMark had the longer title of the "20th-Century Fox Fanfare with Cinemascope Extension". It also had a more definite ending cadence. Sometimes a theater would open their curtains even wider during the extension, to dramatize how much wider Cinemascope was than the standard 4:3 aspect-ratio screen used by earlier films, and especially by that nemesis of the motion picture -- the fledgling gadget called television.

Ed Nassour writes, "The Cinemascope extension was recorded on six tracks, three with close perspective, left center and right and three with a long shot pick up with the microphones at the back of the stage. This was the normal setup for stereo recordings made at Fox. The [introductory] snare drums [actually military field drums, or "tenor" snare drums] were recorded on a separate pass and later mixed together. In 1997 David Newman conducted the Cinemascope version in a new recording to christen the reopening of our scoring stage now known as The Newman Stage. I had him do a new version of the TV logo that Lionel Newman had conducted for all those classic Fox TV series back in the sixties. Due to the severe time constraint placed on logo music by the networks (3 seconds) the orchestra played so fast that they sounded as if they were on helium!"

Other Studio Logos had a more well-documented beginning. Franz Waxman's opening to MGM's "Philadelphia Story" (1940) included a fanfare for a new visual trademark. It was known from that point on as the "MGM Fanfare", replacing one composed previously by Leroy Shield (who also wrote the "Our Gang Comedies/Little Rascals" theme music).

Even low-budget studios like Republic used signature pieces behind their trademark "emblems" shown at the beginning of their serials, and for episodic Chapter openings.

Technologies besides Fox Cinemascope had their own logo too, as illustrated by the Signature IDs which were created especially for Cinerama, VistaVision, and NBC Color Television.

Some trademark logos evolved as time went on. It almost seems like the influences of the individual film score and perhaps studio politics influenced this evolution of studio logos in some cases.

Logos Can Evolve Over Time

For example, at a special collections archive containing film scores, I've had the privilege of comparing the manuscript scores of several Paramount films which began with the Trademark Fanfare composed by Nathan Van Cleave during the early 1950s. Mr. Van Cleave was the studio's main orchestrator during this period. This rather unusual and dramatic wide screen visual trademark had an equally dramatic musical treatment -- a polychordal melody, with bass and inner parts in a fugal contrary motion. This Fanfare originally included quotes of the earlier "Paramount Signature" of Janis and King used as the concluding motif of "Paramount On Parade". At the height of the wide-screen technology wars -- when VistaVision was challenging Cinerama -- the VistaVision Trademark Fanfare was expanded to a dazzling length and effect.

When used to open "White Christmas" it even included a modulation to a glittering intro which then segued into the main song of the picture -- the familiar tune "White Christmas". This "sparkling" motif from the "White Christmas" intro was pretty effective, so it was then used for subsequent versions of the logo in later films but moved to the front of the logo. In later films, alas, this logo eventually was cut back to a shorter version after the novelty of the technology was less important to promote. It is sometimes called the "Paramount Seal" in later soundtrack recordings.

TV Logos and the Trend Toward Brevity

When television arrived, the film studios which had TV divisions (Revue, for example, at Universal) commisioned logos to use at the END of their filmed TV shows (sometimes called the "hitch-hike" or "trailer.") Juan Esquivel (yes THAT Esquivel) teamed up with Revue music director Stanley Wilson to create one of the most identifiable TV logos for series distributed by Universal/MCA-TV. It's not clear how two composers are needed to collaborate on a piece of music that is only four measures long. [A later version expanded the logo to a standard "tune" length, so perhaps that THEME was the derivation which became the short logo...] In subsequent years, the 4-bar logo was shortened and re-arranged by Pete Rugolo, Jack Marshall, Quincy Jones and Robert Prince.

Unfortunately in the overlapping style of network television today, in the desperate effort to minimize "tune-out", there may be no time for such "icing on the cake." At the end of one show, closing credits seem to merge into a promo for another, which segues into the next show without a break. But then, at the movies, there are still a few seconds of time for logos...at least for now...

In researching these compositions, I find it odd that relatively few of them were filed for copyright individually. Perhaps the studios felt since the music was so short and was associated with the visual logo, that the film or video treatment plus the music combined was more of a corporate ID than two separate works of art needing protection from infringers. Of course, some were part of larger film scores which may have been copyrighted.

At any rate, here are the principal compositions used for film and TV logos. In the past, logos were also known as "signatures", "fanfares", "emblems", "I Ds" and "trademarks". This list has been compiled from ASCAP, BMI, and other sources:

[Even "three little notes" can be an official logo...] Here are some credits from ASCAP and BMI:

First Chimes were a Glockenspiel

Musical Compositions based upon the "NBC Chimes" motif


Return to the Light Music Hall of Fame Main Page